Why would you make an unfiltered white wine? So many people ask me with broad intrigue about my skin contact fermented, single vineyard unfiltered Mudgee Chardonnay.

Dark, golden, cloudy, hazy… misty. Whatever you want to call it, it is visually challenging for some people. After 60 plus years of drinking white wines clarified and ‘star bright’, why would I make mine cloudy?

It begs the question… why would I do it and risk sales or ridicule?

There are really great reasons why I have made my skin contact chardonnay, cloudy and that I didn’t clarify or fine or filter.

The lees by nature are very creamy, added with the extra tannin (flavonoids, tannin, procyanidins and extra flavour compounds – the entire wine has a little ‘extra’ when left unfiltered leading itself to be ‘richer’ in dimension. Creamy, thicker texture and body and structure without harshness.

Because I have made my Chardonnay with skin contact, oak and Sur lee ageing, there is an abundance of natural fruit extracts, esters (aromas), fruity flavours, sugars and also other complicated flavour precursors – everything and a little extra that can be found in the lees after fermentation to age on and develop deeper and richer flavours.

Flavonoids, tannins, procyanidins and catechins from the skins and seeds that ‘can’ make the resulting wine potentially bitter and astringent.

Ageing on Lees, and even allowing a small amount of lees into the bottle, not only plumps and makes the texture creamy (as stated above). This, in part, is due to the sugar proteins binding up with some of the oak and fruit tannins to soften them and bring balance to the end mouthfeel. So the lees in the bottle brings balance and richness and extra flavour.

4. The Skin and Seed Extracts and Lees are Potent Antioxidants

Not only do these components add to texture and mouthfeel, they are organically and chemically powerful antioxidants, delivering two positive outcomes. It means they are healthy and have been linked to cardiovascular health and cancer prevention and general organ anti-ageing.

The very effect is stated in the name ‘antioxidant’ – meaning – its anti-oxidising. The wines will preserve longer and age longer in bottle.

Now, I would be completely out of line if I were to state that wines made in this way promote health, as alcohol, the little devil, completely ruins the party in this argument. But to have these components mean that they can actually keep your wine fresh and vibrant a little longer and that’s a good thing.

Therefore the tiny lees sediment in the bottom of the bottle should protect the wine from ageing and maintain freshness a little longer than perhaps expected.

When released two years ago, as you would easily guess, I had a hard time convincing industry professionals to list it on restaurant wine lists.

Just give it a go and test it out. Why? Because a Sommelier wanting to be esteemed by a reliable wine list isn’t going to take risks.

But my Chardonnays are getting more and more popular. Now after nearly two years in bottle, it has developed magically with secondary notes of dried stone fruit and nutty biscuit, brioche and aromatic tea notes along with depth and creamy viscosity – all due to ageing on the Lees in barrel and bottle!

You see it just takes time, and if it tastes good, and its reputation grows, people will give it a try!

The 2014 is all but gone, BUT, the 2016 Eloquesta Chardonnay is showing great potential already.

The Future and other ‘Misty’ offerings: The Eloquesta Mudgee Single Vineyard 2016 Chardonnay Wine 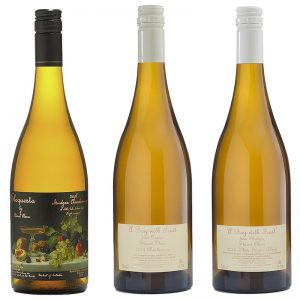 The 2016 Mudgee Chardonnay is tasting better and better. 16 months in new and old oak, ageing on total Lees the entire time taking lees stirring each month.

It is a different wine in character and structure, and from this particular vineyard it is very ‘floral’ containing notes of white fruits, nectarine, apple, pear, white fruit candy and honeysuckle. Not as much ‘honey baked peach’ characters, apricot and tangerine and creamy texture from barrel fermentation as the 2014, but still very fresh and vibrant showing years of promise.

Please try some for some unfiltered goodness!

Buy the Eloquesta Mudgee Single Vineyard 2016 Chardonnay in a 12 pack or 6 pack. Or buy a single bottle as part of a mixed 12 pack or mixed 6 pack.

Hand made, boutique, artisan red wine and white wine from Mudgee, NSW, Australia. Liquor Licensing Act 1997. It is against the law to sell or supply alcohol to, or to obtain alcohol on behalf of, a person under the age of 18 years.